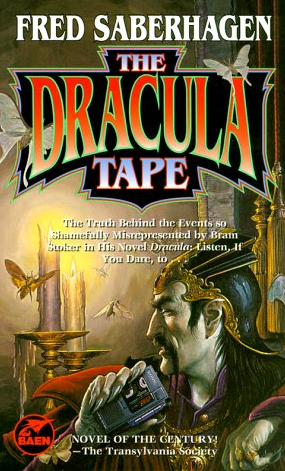 A 1975 comic-horror-adventure novel by Fred Saberhagen, which offers an alternative perspective on the horror novel Dracula. Specifically, it hinges on a fact about the earlier work that is both glaringly obvious and yet easily missed; of the many first-hand testimonials provided to record the battle between the vampire Count Dracula, his nemesis Van Helsing, and Van Helsing's allies, one important perspective has been notably omitted — that of Count Dracula himself. The Dracula Tape thus revolves around Dracula, several decades later, deciding to finally address this imbalance by hijacking a car belonging to descendants of the Harkers, his old enemies, and by recording his memoirs of the event in question into their tape recorder.

Dracula's account begins with him having tired of life in a crumbling castle hidden in the wilds of Transylvania surrounded both by irritatingly backwards and superstitious peasants and a trio of insufferable vampire brides. He decides to break his centuries of self-imposed exile and reintroduce himself into human society, hoping to find more enlightened, pleasant and welcoming company in London, then the capital of the greatest and most prosperous empire ever known. To this end, he employs Jonathan Harker, a young British solicitor, to purchase him a British residence, and tries to both make Harker welcome in his castle and gently guide him into knowledge of the existence of vampires.

Unfortunately, a series of misunderstandings work to negatively colour Harker's impressions of Dracula, leading to a chain of circumstances that results in Dracula's subsequent arrival in Britain going... a bit pear-shaped. As Dracula tries to cope with the increasing number of enemies he somehow seems to be making, among them obsessive vampire hunter Abraham Van Helsing and Harker's quick-witted and attractive wife Mina, it soon becomes apparent that there was more — a lot more — going on that Stoker's novel recorded, that there were several misunderstandings colouring events, and that Dracula might not be the monster he's been depicted as all this time after all...

The novel was the first in a lengthy series of novels featuring Saberhagen's interpretation of Dracula and other likewise more-or-less-positively depicted vampires. The second in the series was The Holmes-Dracula File, in which Dracula finds himself encountering... well, you can probably guess.

The Dracula Tape provides examples of: