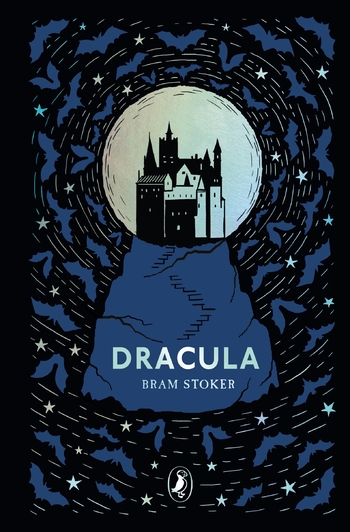 "Welcome to my house! Enter freely and of your own will!... Come freely. Go safely; and leave something of the happiness you bring!"
— Count Dracula
Advertisement:

The original Bram Stoker novel that the Public Domain Character Dracula comes from. It was first published in 1897.

Jonathan Harker, a young British solicitor about to be made partner, is sent out to Castle Dracula in Transylvania to see about a new client of his firm. Waiting at home for him is his young fiancée and secretary, Wilhelmina "Mina" Murray. Jonathan expects to be back home within a few weeks, but he doesn't know that Count Dracula is an ancient vampire, whose intentions in moving to England are nothing less than a plan to feast on the teeming crowds of London.

Meanwhile in England, Dr. John Seward, keeper of an insane asylum, notices a strange habit of his patient Renfield: consuming live things so as to absorb their life energy. Renfield keeps trying to escape to the old abandoned house next to the asylum, which seems to be seeing a lot of activity all of a sudden. And Lucy Westenra, Mina's beautiful best friend with one fiancé and two men in unrequited love with her (Dr. Seward being one of the two), is beginning to fall ill...

Concerned about Lucy's health, Dr. Seward notifies his Dutch mentor, Dr. Abraham van Helsing. When Van Helsing recognizes Lucy's illness as the mark of the vampire, he gathers Lucy's loved ones around him to save the girl: her fiancé Arthur, Lord Godalming; her American former suitor Quincey Morris; Jonathan Harker (who was found severely traumatized by Dracula, but alive), and Mina. Knowing that Dracula's power doesn't work during the day — although he can still move about, and fight, quite well during these hours — they form a plan to hunt him down and rid the world of him forever. Although the men initially try to keep Mina out of the loop to protect her feminine sensibilities, she quickly proves herself to be a strong and thoroughly clever investigator... which Dracula himself is just as quick to notice.

This book is now in the public domain, and can be found on Project Gutenberg

The main characters in the novel include: