The Hilarity of Hats 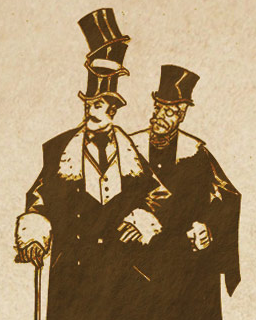 "Tarnish notte the majesty of my TOWER of HATS."
Advertisement:

Hats as a clothing article were once a sign of social standing but are nowhere near as prominent as they used to be. Their unfamiliarity to the modern audience makes them a source of comedy.

This trope comes in two forms: silly hats or inexplicable obsession with hats.

Contrast Nice Hat, where the hat is respected, and Hat Damage, which may result in hilarity. A cornerstone of the Brotherhood of Funny Hats. A distinctive hat will often be a character's Signature Headgear. A parody of the Hat of Authority is a common way of puncturing the fragile dignity of said authority.