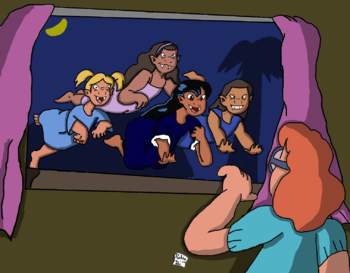 "C'mon Mertle, being undead and weeeird is awesome. Join us! The other girls love it. Don't you guys?" "Yeeeeah" note Art

, used with his permission.

Usually, whenever there's a story that involves a malevolent force that can subjugate others through supernatural means, those affected will, of course, go after those they usually know, often droning "join us" in some fashion, sometimes zombie-like, or just as a way to really showcase the victims aren't themselves. Granted, this won't make for a convincing argument since the victim will be less than willing to take the offer, but it nevertheless does a good job in showcasing the threat of said force. Think of it like peer pressure, only much more scary.

Often the result of a Hive Mind. Sometimes a staple of Zombie Apocalypse, if said zombies are a bit more sentient. Can often overlay with Transhuman Treachery as well, if the victims are really sincere that the transformation is better than being normal.