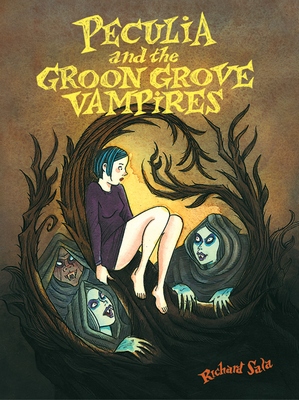 Yeah, just a typical day for her.

Peculia is a comic series written and drawn by Richard Sala. It is a spin-off of his original 12-issue series Evil Eye. Basically it tells of the misadventures of the title character Peculia, a barefooted waif who has a knack for getting into some rather morbid situations. Usually involving some form of monster, cultists or murderers.

Combined with Sala's artwork and his penchant for macabre storytelling, it is a very interesting read to mystery and monster lovers alike. Along with the issues in Evil Eye, there a self titled book and a original graphic novel (Pictured) Peculia and the Groon Grove Vampires.