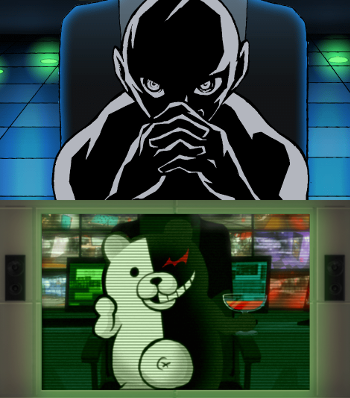 Monokuma giving an announcement (below) and the mastermind controlling him (above).
"Metatron acts as the voice of God. Any documented occasion when some yahoo claims that 'God' has spoken to them, they're speakin' to me. Or they're talking to themselves."
— Metatron, Dogma
Advertisement:

A character may be strictly He Who Must Not Be Seen, but they need to transmit orders to their subordinates and intimidate their enemies.

The solution? Hire this guy. His job (although sometimes not his only job) is to talk for (and sometimes even impersonate) the real He Who Must Not Be Seen, who often is standing somewhere in the background.

The Mouth of Sauron often serves as The Dragon and/or Number Two, and can sometimes be a villainous counterpart to a Supporting Leader: when the real villain is in the background pulling strings, he needs someone to go out and lead his Evil Army against the forces of good.

Sometimes, the Mouth of Sauron is set up to be the Big Bad and is even believed to be so by everyone except the real Big Bad's most trusted advisers. In this case, it overlaps with The Man Behind the Man.

While many examples and the Trope Namer are villainous, this is not necessarily an "evil-only" trope: any heroic Mysterious Employer is likely to have one. Christianity has two famous examples: The Metatron (in older stories) and the Archangel Gabriel (in the most famous one) who speak for the big guy himself.