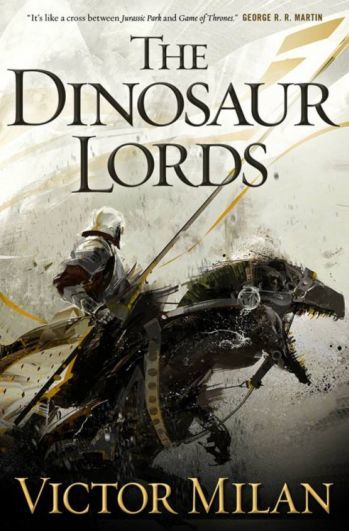 The Dinosaur Lords is a fantasy/science-fiction series by Victor Milán, and delivers exactly what it promises to: medieval knights and dinosaurs.

Welcome to Paradise, a world where food is plentiful, nothing dies of old age, magic creeps under the radar and dinosaurs are war mounts, beasts of burden, predators and food source. This doesn't mean that the Empire of Nuevaropa, one of the bigger countries of Paradise, is at peace. On the contrary - following a Succession Crisis, there's civil war brewing. And it's far from the only conflict taking shape there.

Karyl Bogomirskiy, a mercenary in service of Nuevaropa, loses his memories after his Triceratops legion is shattered and the Empire he fought for backstabs him. Along with Rob Korrigan, a wandering minstrel, Dinosaur Master and the man partly responsible for Karyl's downfall, they're recruited by a self-proclaimed sorceress to train the people of her homeland in arts of war in preparation for religious schism. Meanwhile, Nuevaropan prince Jaume, who did the backstabbing, wanders all over the land fighting wars and skirmishes he doesn't think wise on orders of an Emperor he doesn't respect, and his fiancee, Melodía, the Emperor's daughter, attempts to carve out a space for herself in imperial politics as the civil war moves from battlefields to the shaded corridors of the Palace of the Fireflies.

Books in the series so far are:

The Dinosaur Lords provides examples of: