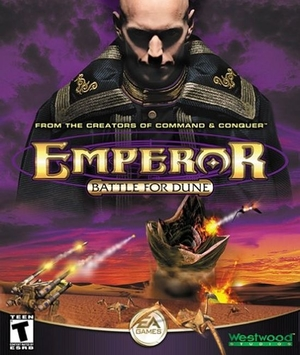 The reign of House Corrino is ended. Another House must take its place. (...) Under the terms of the Great Convention, a limited form of warfare, known as the War of Assassins, has been declared by three factions: House Atreides, House Harkonnen and House Ordos. (...) The war will be limited to the planet Arrakis. Use of atomics is forbidden. So long as these rules are followed, the Guild will not interfere. But understand this: during this conflict, and following it, no matter what the outcome...the spice must flow.
— Shafla of the Spacing Guild, opening narration
Advertisement:

A Real-Time Strategy game set in the Dune universe.

Released by Westwood Studios in 2001, Emperor: Battle for Dune is a sequel to Dune II and Dune 2000 covering the War of Assassins as the three Houses of Atreides, Ordos, and Harkonen fight for control of Arrakis, and various subfactions in the Fremen, the Ix, the Tleilaxu, the Sardaukar, and the Spacing Guild add a level of customization and move the plot along.

The Padishah Emperor is dead, and the Spacing Guild presents the three great houses with a challenge: A War of Assassins for control of Arrakis, with the victor being crowned the new ruling house.