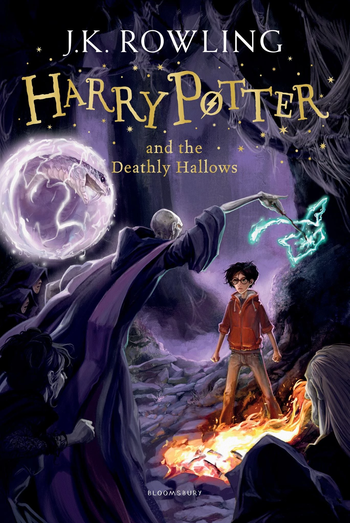 ”The last enemy that shall be destroyed is death.”
"Harry is the best hope we have. Trust him."
— Remus Lupin (quoting Dumbledore)
Advertisement:

Harry Potter and the Deathly Hallows is the seventh and final instalment of the Harry Potter series, published with great fanfare on July 21, 2007.

Harry's not going to school this year, but don't worry—it's for a good cause. Harry, Ron and Hermione's only hope to defeat Voldemort is destroying all his Horcruxes before he seizes total power. Harry, eager to get started on his hunt for Horcruxes, gets slammed by Voldemort's quick overthrow of the Ministry, forcing the trio into hiding, where they must contend with themselves, who they are, what they are doing, feelings of helplessness, and if they ever really knew Dumbledore.

Also, remember how the previous few books just had one person die at the end? This time, no one is safe at any point in the story. Rowling had warned in interviews that book 7 would be a bloodbath, and wasn't kidding.

The film adaptation was split into two films, released in 2010 and 2011 respectively.

open/close all folders
Tropes A-F
Tropes G-L
Advertisement:
Tropes M-R
last Horcrux is hidden in Hogwarts, he rushes to Hogwarts to find it, which sparks the Final Battle.
Tropes S-Z