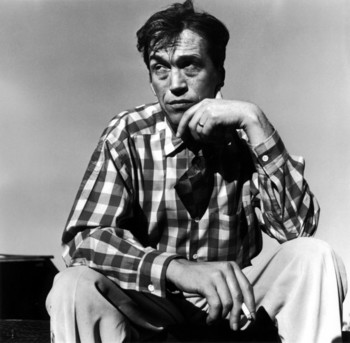 "The directing of a picture involves coming out of your individual loneliness and taking a controlling part in putting together a small world. A picture is made. You put a frame around it and move on. And one day you die. That is all there is to it."
Advertisement:

John Marcellus Huston (August 5, 1906 – August 28, 1987) was an American director, screenwriter, and occasional actor who made films in a variety of genres across a long-spanning career. His films tended to match his own personality — tough, stylish, always with a bit of a threatening edge.

Huston worked as a writer-for-hire before breaking into directing with the noir classic The Maltese Falcon; other noteworthy films he made include The Treasure of the Sierra Madre (for which he won two Oscars), Key Largo, The Asphalt Jungle, The African Queen, Beat the Devil (as you can see, he worked well with Humphrey Bogart), Moby-Dick, The Misfits (notable as the final film for both Clark Gable and Marilyn Monroe), Casino Royale, The Man Who Would be King, Annie, Prizzi's Honor, and Wise Blood. He worked right up to his death at age 81; he directed his final film, The Dead from a wheelchair while hooked up to oxygen. The film was released posthumously.

His World War II documentaries The Battle of San Pietro and Let There Be Light are among the best ever made about the war.

He was also a well-regarded character actor, benefitting from a craggily face and a very distinctive deep rich voice. He was nominated for the Oscar for Best Supporting Actor and won the Golden Globe for his turn in Otto Preminger's The Cardinal and played one of cinema's most iconic villains, Noah Cross in Chinatown. Indeed, his performance there was cited as an inspiration for Paul Thomas Anderson's There Will Be Blood where Daniel Day-Lewis plays a similarly evil robber baron. Among nerdier, more fantasy-inclined circles, later in life he reigned for a time as the voice of Gandalf, and his performance set the bar that Ian McKellen had to meet several decades later, he also voiced the narrator on the U.S. release of the Australian animated film Epic (1984). Decades after his death, Huston's final starring role, that of maverick filmmaker Jake Hannaford in Orson Welles The Other Side of the Wind premiered in 2018 on Netflix.

Huston is such a colorful character that his life has inspired other stories and movies. A novel about the making of The African Queen (written by screenwriter Peter Viertel) was eventually adapted by Clint Eastwood as White Hunter, Black Heart, where Eastwood plays John Wilson, a spoof of Huston's Large Ham womanizing dandy personality.

He was the son of Walter Huston; the father of Anjelica, Tony, and Danny Huston; and the grandfather of Jack Huston (Richard Harrow on Boardwalk Empire).