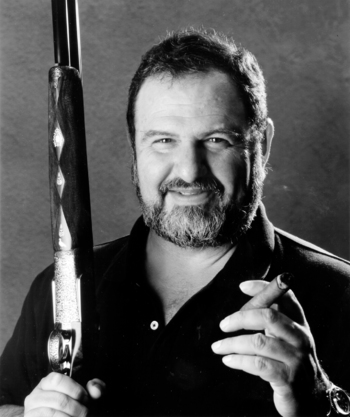 John Milius shown with two of his favorite things:
a gun and a cigar.
Advertisement:

John Frederick Milius (born April 11, 1944 in St. Louis, Missouri) is an American screenwriter and director. His writing credits include the first two Dirty Harry films and Apocalypse Now, and he both wrote and directed The Wind and the Lion, Conan the Barbarian, and Red Dawn.

Growing up, Milius dreamed of joining the military. In the late 1960s he attempted to enlist in the United States Marine Corps and volunteer for Vietnam duty, but was rejected due to his chronic asthma. (Milius admits that being rejected by the military probably fueled his fascination with war.) He then considered becoming a historian or an artist, but after stumbling upon a theater showing a week of Akira Kurosawa films, he decided he wanted to make movies, so he enrolled in the University of Southern California film school (one of his classmates was a young George Lucas), thereby embarking on his filmmaking career.

Milius is known for being a staunch political conservative, which makes him a minority in Hollywood. For five years he was a member of the National Rifle Association's Board of Directors along with Charlton Heston. His movies tend to be Rated M for Manly, with lots of violence, feats of strength, and bravery bordering on recklessness. Revenge is also a common theme in his writing, with protagonists often seeking vengeance over an injustice they have suffered. Milius was also a passionate surfer for most of his life, but gave it up when he turned fifty.

It's also worth mentioning that Milius, a longtime friend of The Coen Brothers, was the inspiration for the character of Walter Sobchak in The Big Lebowski.