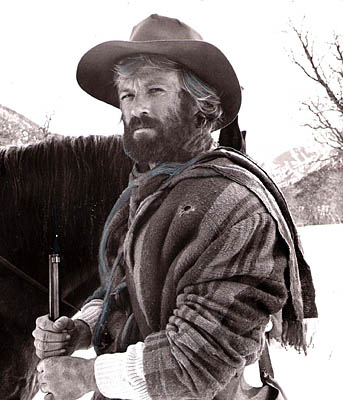 A 1972 Western film directed by Sydney Pollack, based (partly) on the life of real-life mountain man John "Liver Eatin" Johnson.

Robert Redford stars as the eponymous Jeremiah Johnson, a jaded veteran of the Mexican/American war, who turns his back on the life he has previously led to become a mountain man up in the Colorado Rockies. His first winter is a difficult one which almost ends in starvation, but he is lucky enough to be taken in by the vastly more experienced Bear Claw (Will Geer). During his time up in the mountains, he becomes unwittingly betrothed to a Flathead Indian woman and adopts a mute young boy, only for them to be murdered at the hands of the Crow Indians. It doesn't get any better.