Film / The Island at the Top of the World 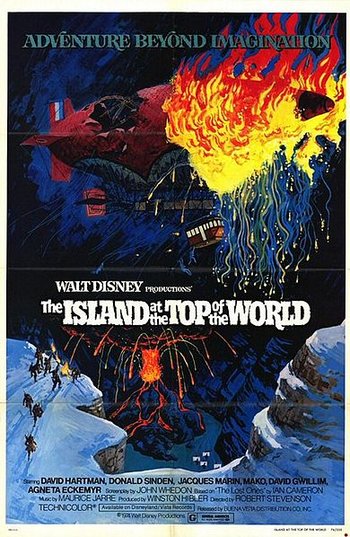 The Island at the Top of the World is a 1974 adventure movie made by Disney based on the 1968 novel The Lost Ones by Ian Cameron.

Inspired by Jules Verne-like adventure stories, the movie is about wealthy British industrialist Sir Anthony Ross who in 1907 arranges an expedition to the Arctic in the search of his son with the help of an American archaeologist, an eccentric French inventor and captain of a dirigible and their (forcefully enrolled) Eskimo guide. In the quest they accidentally uncover a Lost Colony of Vikings totally isolated from society, thus living like they did a thousand years in the past.

The film is infamous in some Disney fandom circles as being the centerpiece and Achilles' Heel of one of the most prominent examples of What Could Have Been in the Disney Theme Parks, a steampunk land known as Discovery Bay proposed for Disneyland. Though the film's failure spelled doom for the original project, the Hyperion found its way into Disneyland Paris and occasionally finds itself connected to other attractions through Story Breadcrumbs hidden here and there.