Series / The Jacksons: An American Dream 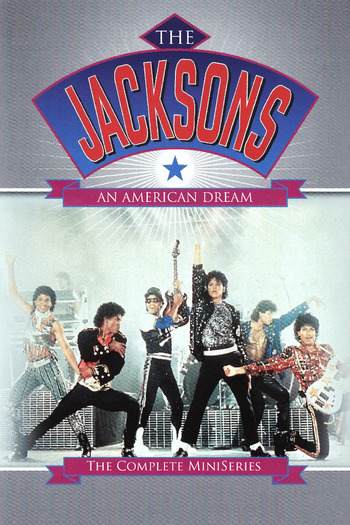 The Jacksons: An American Dream is a four-hour miniseries broadcast in two parts on ABC in November 1992. Based on the history of the famed musical Jackson family (based largely on Katherine Jackson's autobiography My Family), the series was executive produced and overseen by family member Jermaine Jackson and fellow Motown alumni Suzanne de Passe, alongside Joyce Eliason and Margaret Maldonado, with Karen Arthur taking up directorial duties.

The first half of the series deals with Katherine and Joe Jackson raising their kids in Gary, Indiana and later dealing with the early fame of The Jackson 5. Part two focuses on the troubles of a young Michael Jackson as he deals with his brothers marrying early into their success, acne problems, his relationship with his father, his status as a global icon thanks to his albums Off the Wall and Thriller, and his infamous Pepsi commercial accident.

Notable for being the first film and TV appearances of Terrance Howard (who played Jackie Jackson) and Jason Weaver, as well as featuring veterans such as Billy Dee Williams, Angela Bassett and Vanessa Williams, the miniseries was critically and commercially successful and won an Emmy Award for "Outstanding Individual Achievement in Choreography". The movie would also receive a Spiritual Successor in Man in the Mirror: The Michael Jackson Story more than a decade later.

A bit of tragic trivia: Wylie Draper, who was personally selected by Michael Jackson to portray his adult self in the series, died a year after the series premiere after being diagnosed with leukemia.

This Miniseries features examples of: