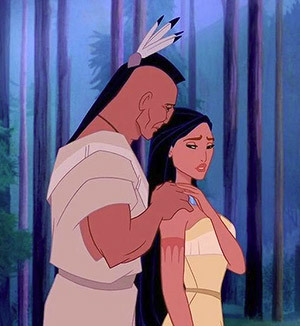 "The movie is more generous in showing what the visitors found here. Columbus encounters friendly Indians, of which one — the chief's daughter — is positioned, bare-breasted, in the center of every composition. (I believe the chief's daughter is chosen by cup size.)"
— Roger Ebert reviewing Christopher Columbus: The Discovery
Advertisement:

Even in Darkest Africa, Injun Country, or the land of Hula and Luaus, everything's better with princesses. The Chief's daughter, in her Fur Bikini or Braids, Beads and Buckskins, is often the first to befriend Mighty Whitey during his visit to the strange new land. She'll conveniently be beautiful by Western standards, but with just enough racial traits to be exotic, and will be a Noble Savage in contrast to the amoral Barbarian Tribe of Hollywood Natives. To show that she is native, gentle, and Closer to Earth, the wild forest animals will flock to her.

Many of a story would have the Chief offer the hero his daughter's hand in marriage, but this is often unnecessary. Just like Asian women in fiction, she'll be irresistibly drawn to the (usually white) hero, to the point that other suitors within her tribe might as well not even bother. Sometimes this trope can be played for laughs by having the girl be Forbidden Fruit to the hero, so when it's found out that he's been getting a little too friendly with her, the rest of her tribe (especially Daddy) will be less than pleased and go for the spears. She'll often be a part of a Love Triangle involving the Mighty Whitey and The Native Rival.

Half the time, she'll be a Damsel in Distress. At best, she'll be able to kick some ass with a spear or bow and arrow, or magic if the setting allows for it. At worst, she'll be a mere bargaining chip and/or Satellite Love Interest. This trope is less commonly played straight in these days of better cultural sensitivity, but may still pop up in some historical works.

A quick Google search identifies the term "Indian Princess" has entered the pop-cultural consciousness, although this is inaccurate. Most tribal cultures did not have hereditary royalty (their leaders are elected instead, like mayors and presidents. The few that are hereditary often are transferred not by the chief's line, but to his eldest sister's children as lineage is only tracked through the mother). Nonetheless, the Chief's daughter fills the same archetypal niche as a European princess, so the phrase is occasionally used as a comparison.

Not to be confused with the usually-white Jungle Princess, who is essentially a female Tarzan. Compare Indian Maiden. See also Green-Skinned Space Babe and Boldly Coming for the far-future equivalent.