Recap / Asterix and the Great Crossing 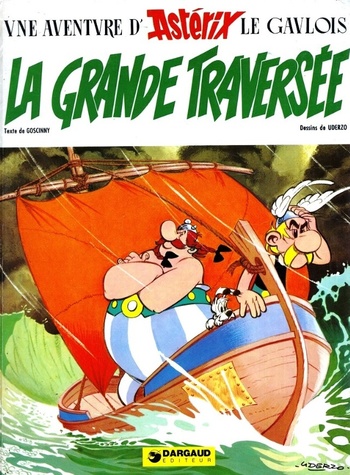 The twenty-second Asterix book opens on a Viking ship sailing through thick fog, helmed by would-be explorer Herendethelessen. One of his crewmates expresses scepticism about the voyage, but Herendethelessen declares that soon, "Yøu'll åll find øut I'm right!"

Meanwhile, in the Gaulish village, an enraged Vitalstatistix confronts Unhygienix the fishmonger about the rotten fish he sold to the chief's shield bearers, who are both ill with food poisoning. Unhygienix explains that the latest shipment of fish from Lutetia is delayed by an ox-cart drivers' strike over the price of hay;note  A poke at the frequent strikes by French hauliers over fuel prices. a taunt from Fulliautomatix soon causes a fight to break out (to the amusement of a nearby Roman patrol). As the dust settles from the fight, Asterix asks Unhygienix why he can't just fish in the sea near the village; the offended fishmonger answers that his fish is top quality bought from Lutetian wholesalers, not just any old fish out of the sea, and they'll just have to wait for the next delivery. However, Getafix says he needs reasonably fresh fish to make the magic potion, and stocks are so low that he can't afford to wait. Asterix, Obelix, and Dogmatix volunteer to go fishing, taking Geriatrix's old fishing boat and a gourd of magic potion. The skies are clouding over as they push out to sea.

The fishing voyage goes badly from the start; when Asterix tells Obelix to throw out the fishing net, the latter doesn't bother attaching it to anything first, and when they try to return to the village for another net, the brewing storm drives them further out to sea. They are forced to spend the night in the boat in the hope that the weather will improve, and, apart from a close encounter with Herendethelessen and his fellow Vikings' ship, the night passes without incident and they wake to find the seas and wind completely calm. However, the storm has blown them so far out to sea that there is no land in sight, and with no wind, they're stuck where they are.

Obelix is now getting hungry; fortunately, Dogmatix spots the ship of Redbeard and his pirate crew on the horizon, and, as luck would have it, they have a huge feast on board for the captain's birthday. The food is commandeered by Obelix, but, in a display of generosity, Asterix leaves the pirates a single sausage for the festivities; Obelix devours the entire feast in minutes except for an apple. Another storm drives the boat still further out to sea, and with just the apple and rainwater to sustain them, Obelix becomes delirious with hunger and jumps overboard. Asterix jumps after him, and the boat is carried off without them; luckily, Obelix finds a branch to hold onto, a sure sign that land is near.

When they reach land, Obelix assumes they have returned home, but a discovery of three strange (but delicious) gobbling birds and a bear, wildlife not native to their part of Gaul, soon puts paid to that theory. They decide to sleep on the question of where they have landed, unaware that they are being watched by the natives. After they wake from their short nap, Dogmatix picks up the scent of one of the natives; Obelix assumes they must be Romans, but gets into an argument with Asterix over the need for stealth - an argument ended by an arrow landing between them. As they try to find the bowman who fired it, one of the natives distracts Obelix with a turkey call, and as he runs off, Asterix is knocked out by a tomahawk and taken prisoner.

Obelix, meanwhile, finds the native making the turkey calls and knocks him out by shaking him out of the tree in which he is hiding. As he tries to find Asterix again, he finds only his helmet, and has Dogmatix use the scent to lead him to the native village, where he finds Asterix tied to a post while the natives dance around him to the sound of drumbeats. After Asterix is untied, he and Obelix continue to speculate on the nationality of the natives and try to surmount the Language Barrier with a display of mime which only confuses the tribal chief. However, when they are each challenged to a fight by members of the tribe, their strength impresses the chief and he invites them to stay.

The Gauls continue to impress the natives during a hunting trip, an account of which is painted onto an animal skin and given to them as a present. The chief is so delighted by their strength that he decides to engage his daughter to Obelix. Alarmed at being pushed into an Arranged Marriage, Obelix persuades Asterix that they should start for home again, and they sneak away by night in one of the tribe's canoes - which happens to have a hole in the bottom, ensuring they don't get far. They swim to a nearby island and spend the night there.

The next morning, Herendethelessen's crew are getting increasingly fed up with the voyage, which we finally learn is in search of a new world which the captain believes lies many miles west of their homeland. The crew are threatening to return to Denmark when Herendethelessen's dog, Huntingseassen, spots the island on which Asterix and Obelix have spent the night. The Gauls see the ship, and Asterix signals to them by standing on a heap of stones while carrying the animal skin and holding a torch aloft to resemble a famous statue.

The Vikings see the signal and land their boat; believing the Gauls to be native to the island, they try to persuade them to board their ship, while the Gauls try to persuade the Vikings to let them board their ship - but the Language Barrier prevents them from realising they are trying to achieve the same thing (although Dogmatix and Huntingseassen are more successful at communicating with each other). As the real natives show up looking for the Gauls, they decide to make a run for the boat just as the Vikings decide to try forcing them aboard; in any event, they all end up on the boat together, leaving only the animal skin on which the pictures of their hunting trip had been painted for the natives to find. The distraught chief's daughter lays flowers at the foot of a totem pole depicting Obelix, Asterix, and Dogmatix.

The Viking ship returns to Denmark, where the explorers' tribal chief, Odiuscomparissen, is furious at Herendethelessen for wasting time and resources on an insane "voyage of discovery" instead of going on raids. Herendethelessen reports that he found the new world he swore existed, and offers the Gauls as proof. The Gauls, not sure where they are or why they have been brought there, try to ask for directions, but the language barrier gets in the way again and they are taken back to the Viking village where Haraldwilssen, the intellectual, gives an account of Herendethelessen's voyage. The impressed Odiuscomparissen decides to make the Gauls the guests of honour at the evening's feast before sacrificing them to the gods.

Fortunately, the Gauls are spared from being sacrificed when one of the slaves at the feast recognises them as fellow Gauls. Odiuscomparissen now believes Herendethelessen just skived off to Lutetia for a few months, and as the would-be explorer threatens to kill the Gaulish slave for lying and making him look foolish, Obelix leaps to his defence and a fight breaks out. The Gaulish slave, Catastrofix, ushers the three Armoricans out while the Vikings are distracted, explaining that he is a fisherman who was captured during a raid, and this is their chance to escape back to Gaul in his fishing boat (as it still contains his net, Asterix decides to ask him a favour on their way home). The Vikings finally notice the Gauls have fled, but Odiuscomparissen decides that they've had a good fight and a good laugh, and forgives Herendethelessen for telling tall tales. Herendethelessen is left wondering if he really did discover a new world.

Cacofonix spots the returning Asterix, Obelix, Dogmatix, and Catastrofix, and they are welcomed back by the other villagers, although Unhygienix is underwhelmed by the quality of the fish they caught in Catastrofix's net. Getafix is intrigued by Asterix and Obelix's stories of the strange island they found on their voyage, but such thoughts are soon forgotten as they sit down to the obligatory banquet... except for Unhygienix, who would rather sulk under a tree.

“These Natives are Crazy!”