Recap / Asterix and the Normans 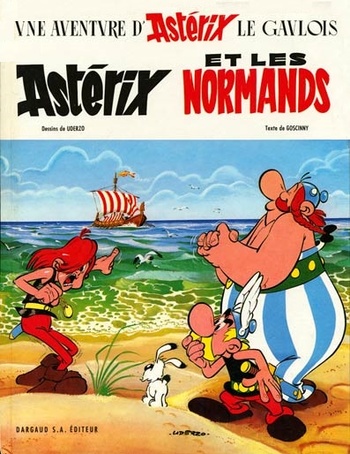 As the ninth Asterix album opens, Vitalstatistix receives a letter from his brother Doublehelix in Lutetia; he is sending his son Justforkix to the village for a holiday, feeling that life in Lutetia is making the lad soft. Asterix and Obelix are put in charge of his training. When Justforkix arrives, it's the typical city boy vs country folk situation, but Justforkix does hit it off with one villager - Cacofonix. Justforkix actually likes his music, and suggests the bard would find better audiences in Lutetia.

Meanwhile, far, far up north lies the country of Norse men, or Normans. The Normans have no fear (as Redbeard and his pirates learn the hard way when they try heading north to escape the Gauls), which is a problem, as this means no fear of authority and thus no discipline. Their leader Timandahaf decides that he and his men must learn fear, as they pride themselves at knowing everything. Plus, Timandahaf has heard that 'fear lends you wings', and mistakenly believes that fear will enable him and his men to fly. They decide to start their educational voyage in Gaul.

Asterix and Obelix start Justforkix's training by getting him out of bed at the crack of dawn (which is usually when he goes to bed) and taking him down to the beach; as Asterix ponders how to proceed with the training, a terrified Justforkix spots the Normans' ship, and is stunned when Asterix and especially Obelix seem excited by the prospect of a Norman invasion. His attempt to raise the alarm in the village goes just as badly; Vitalstatistix simply asks Asterix and Obelix to do a bit of reconaissance, and Getafix decides to brew a bit of magic potion, just in case. Justforkix' mood deteriorates when Asterix and Obelix report that the Normans have landed, and, quite apart from being alarmed, are splitting their sides laughing at the invaders' names all ending in "-af". The terrified Lutetian tries rousing the other villagers into fleeing, but instead just gets them fired up at the prospect of having someone other than the Romans to thump.

Timandahaf sends one of his warriors, Nescaf, to do a bit of scouting of his own, and he overhears Asterix and Obelix on their way out boar hunting, and boasting about their own lack of fear, but the Norman's mood improves when Justforkix catches up with them and sobs about how terrified he is - and sours again when Asterix and Obelix are able to calm him down. Timandahaf decides they need to get Justforkix alone to teach them the meaning of fear, and they're in luck - he has decided to return to Lutetia, but a souvenir menhir from Obelix breaks his chariot, and he is kidnapped while attempting to repair it. Unfortunately, the Normans can't get their heads around the idea that they are the ones frightening him instead of the other way round, and they tie him up on the beach until he can scare them - if he fails, they'll throw him off a clifftop, and watch his fear make him fly.

In the meantime, Asterix and Obelix have found Justforkix's broken and deserted chariot, and Vitalstatistix sends them into the Norman camp to get answers; inevitably, a fight breaks out, and Asterix and Obelix are surprised to see that the Normans take more of a beating than the Romans (thanks in part to the reviving effect of their drink of choice, apple brandynote  Or Calvados

as it's now known.) - a comparison emphasised when a Roman patrol shows up and gets caught in the crossfire. When Asterix finally gets Timandahaf to explain what they want with Justforkix, he gets an idea and sends Obelix back to the village to fetch something that he says will really scare them, while Asterix himself stays behind as a second hostage.

The "something" for which Obelix has been sent back to the village is the bard Cacofonix - except he isn't in the village. Fed up with having his talents unappreciated, he has taken Justforkix' advice and set out for Lutetia, but Obelix and Dogmatix are able to follow the trail of people complaining about the horrible noise and catch up with the bard, who agrees to return for Justforkix's sake (and insists on entertaining the unfortunate Obelix and Dogmatix with a version of "This Old Man" that goes on for at least 157 verses).

Meanwhile, Timandahaf's patience has run out, and he decides to have the two hostages executed. Justforkix manages to gain himself a stay of execution by offering to scare the Normans, but his attempts all fail miserably, and the Normans Firsthaf and Secondhaf prepare to throw him off the cliff... until a magic potion-strengthened Asterix breaks out of his chains and comes to the rescue. Seeing his friend outnumbered moves Justforkix to get over his own fears and help out, if ineffectually. Fortunately, he buys them just enough time for Obelix and Dogmatix to return with Cacofonix; the Normans initially laugh off the idea that the bard will scare them... and then the singing starts, and they are begging him to stop, as they can't stand anymore! Just the thought of listening to Cacofonix's voice makes them ill, which Asterix declares evidence that they now know the meaning of fear. The ecstatic Normans plan to express their gratitude by massacring the Gauls and sending them to Odin's table in Valhalla, but Justforkix has well and truly overcome his fear, and leads his fellow countrymen in a fight against the Normans, whose newly-gained knowledge of fear prompts them to beat a hasty retreat over the cliff and back to their ship... during which they learn that fear does not lend wings, and what's more they're now too fearful to fight or even work their ship!

Back at the village, Justforkix is now more willing to go about his training under Obelix. Asterix asks Getafix if fear has any use, and the wise druid states that only when one has overcome their fears can they truly be courageous. Meanwhile, the Normans manage to get over their own fears, becoming fiercer (as Redbeard and his band once again learn the hard way). Before Justforkix leaves for Lutetia, the village holds one of their ending feasts, and Cacofonix is allowed to sing for his part in the boy's rescue.

“These Normans are crazy!”