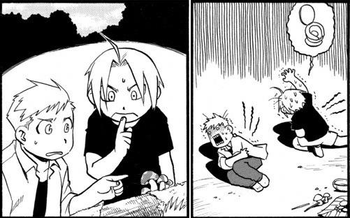 Ed and Al learn the wrong kind of Truffle Shuffle.
"It's food poisoning. I have it too. I did not sleep for one second last night, and I cracked the bottom of the toilet bowl."
— Ron Swanson, Parks and Recreation
Advertisement:

Someone eats bad food and doesn't know it. The street vendor's meat was old. The fridge failed and the egg salad sandwiches went off. The cook used dirty utensils. Or sometimes, they just think they ate bad food and panic. Occasionally, are horrified that they fed their family bad food. Once in a while, it will be seemingly Ripped from the Headlines (the All in the Family example came not long after a botulism scare on the east coast). If you have a Lethal Chef in your cast, count on at least one scene like this to happen during the course of the work.

May be considered a Sub-Trope to Amusing Injuries.

May overlap with Last Day to Live. May lead to a Vomit Chain Reaction, as with the 6teen example. For media that tries to go the extra-gross route, such as in Bridesmaids, it may also lead to massive Potty Failure or Vomit Indiscretion Shot. In less gross works, it might lead to a Potty Emergency or a Vomit Discretion Shot.

Often Played for Laughs, although it can be Played for Drama if the outbreak ends up killing people.

It is suggested that this may be because the symptoms are usually of the distressing-cum-embarrassing sort (nausea, diarrhea, vomiting), and in part because of anxiety over E. coli and the like. Either way, it's a pointed reminder of how much we rely upon our bodies. "For surely laughter masks a nervous soul."

Some shows seem to use this trope especially. It has been observed that The Simpsons use it to shift the Character Focus of the episode by eliminating not needed characters. Examples: the oysters eliminated everyone leaving only Bart & Skinner, on whom the episode was focused. The vegetables make the whole family sick, so Lisa started her singing career.

Compare Water Source Tampering, Tampering with Food and Drink and Way Past the Expiration Date which all can lead up to this trope.

In the middle of the Disaster Day simulation, an actual disaster takes place in the form of food poisoning from a macaroni salad truck.

In the middle of the Disaster Day simulation, an actual disaster takes place in the form of food poisoning from a macaroni salad truck.