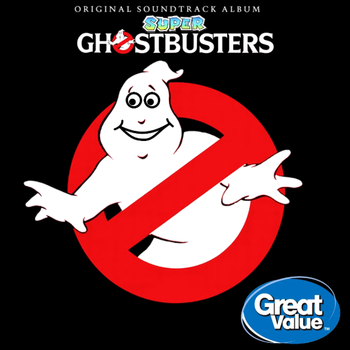 "Ghostbusters! They're back in town!"
"THIS SONG IS DEDICATED TO RAY PARKER JR., THE ULTIMATE DEATH METAL MASTER!!!."
— "Ghost Boston"
Advertisement:

Super Ghostbusters, released on November 20, 2018, is the third studio album by Swedish Heavy Metal musician Vargskelethor. A radical contrast from his traditional sound, the album shifts to avant-garde Comedy Music, more in line with the leftfield humor of his livestreams as Vinesauce Joel. Heavily influenced by the likes of Frank Zappa, Captain Beefheart, and especially Outsider Music artist Wesley Willis, the album is based entirely around various MIDI renditions of "Ghostbusters" by Ray Parker Jr.

The record is a Concept Album based around a babbling Cloudcuckoolander armed with a cheap Fisher-Price keyboard, who narrates the multitude of supernatural, mundane, and generally bizarre troubles that face him throughout his life, both singing praises of the Ghostbusters and annoying them out of their wits. According to Vargskelethor, the album was created as a means of distracting himself during an internet outage, with the resultant boredom translating to the increasingly surreal tone of the album's content.

With Word Salad and Toilet Humor abound, Super Ghostbusters was released suddenly on an unsuspecting Twitch chat before being officially uploaded to YouTube

in its entirety four days later. With every track being titled some variation on "Ghostbusters.mp3", there really is no anticipating what insane new direction the album will take without listening to it oneself.

All of the track names are a variation of "Ghostbusters.mp3," so another (more fitting) description of each track is given here as well.
Advertisement:

Watch the fuck out, it's me! I'm gonna bust a trope!