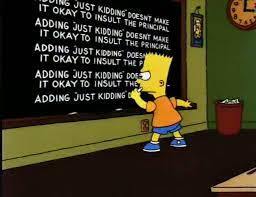 "He let the contents of the bottle do the thinking
Can't shake the devil's hand and say you're only kidding"
— They Might Be Giants, "Your Racist Friend"
Advertisement:

When humour is used to excuse behavior that others find offensive and inappropriate, you have just encountered a "Just Joking" Justification. Never mind that this seldom soothes the sting; the original barb hurt, after all, and hurting others for one's amusement won't earn much sympathy, either. There is overlap between this trope and emotional abuse.

This is one source of humour which comedians have used as a reservoir of material. Contemporary stereotypes are thus often causes of this trope, be they sexist, racist, homophobic, or otherwise. These can range a very wide gamut, from people getting upset at Michael Richards' (Seinfeld's Kramer) infamous n-word tirade at a heckler, to people getting upset when they don't realize that Jon Stewart's jokes about Jewish conspiracies are actually deconstructive parodies (and he is Jewish). Frequently features as an excuse for invoking Mars and Venus Gender Contrast.

An Affably Evil character may actually get away with this on a regular basis, as may someone who's considered Too Funny to Be Evil. It definitely won't work if Evil Has a Bad Sense of Humor. Compare and contrast Sarcastic Confession. Conversely, it may result in Crying Wolf if people conclude they shouldn't take any of the speaker's "jokes" seriously. A related tactic is called Just Asking Questions,

where the person will make outrageous accusations but phrase them as questions (e.g "Did Bob screw a goat? I wonder") to avoid getting in trouble for slander. In other words, it's very easy for this trope to become a form of Jerk Justifications.

You may also consider this as a form of justification for when an attempt to Cross The Line Twice results in Dude, Not Funny!. Contrast Poe's Law, when it really was just a joke, but the satirical intention got lost (or when something that seems too ridiculous to be sincere is not a joke at all). Also see Parody Retcon for when this is applied to entire works.

Not to be confused with I Was Just Joking, where the "Just Joking" wasn't made up after the fact; the offender intended to make a joke for real.

Compare Just Testing You. See also Humor Mode, which is doing this preemptively for a statement that really never was meant to be taken seriously.

Kara looks towards her wrong shoulder for advice after inadvertently hurting Tuca's feelings.

Kara looks towards her wrong shoulder for advice after inadvertently hurting Tuca's feelings.