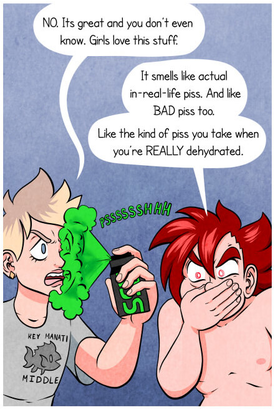 Lynxnote the UK brand name of Axe: for that cheap teenage smell of desperation.
— Andy Parsons, Mock the Week
Advertisement:

Body scents can be a nice way for a guy to spice up his attractiveness, but when used inappropriately, they can give an air (so to speak) of smarmy overconfidence and overestimation of charm, to the point of coming off as sleazy or creepy. Cologne and aftershave are the classic avenues for this, but in modern days the go-to is body sprays, especially brands like Axe and Tag. If a male character is known for using body spray, the chances are very good that he's a clueless lout who thinks that smelling good is all that's needed to be attractive, or is using it to mask his insecurity and lack of game, or he sprays himself down so heavily that people can't stand to be around him. He may even use it as a substitute for proper hygiene. The actual odor itself can also be offensive.

One particular brand of male Jerkass is often referred to as a "douchebag". The term carries certain connotations about his personality, clothes, hairstyle and/or accessories, but (over)use of body spray is a very common association.

This negativity comes from blowback against advertising for body sprays. They were usually marketed as the aerosolized key for a man to draw the attention of every woman in olfactory range. However, some brands ran that theme to over-the-top and borderline misogynistic levels that began to draw the ire of both women and media.

Anticipatory Breath Spray can cause a similar reaction if the guy doing the freshening up fits the same kind of loser image.

Contrast Sex for Product, where the product actually does attract women.