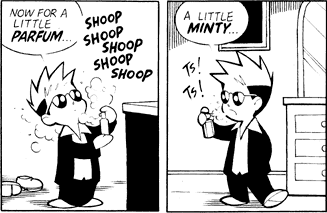 A character believes the time has come for The Big Damn Kiss with their Love Interest.

To make the moment as perfect as possible, the character will spray breath freshener into their mouth to chase off any potential halitosis issues before leaning in to kiss their intended.

This trope is often used comedically, and the character spritzing breath spray is usually rebuffed. Bonus points if they accidentally use perfume or cologne instead of breath spray.

Make-Out Point is a co-trope. A Sister Trope to Anticipatory Lipstick. See also You Need a Breath Mint.