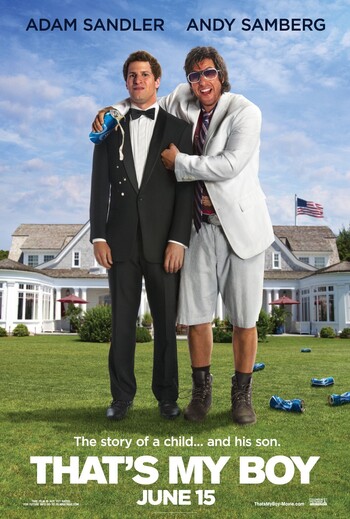 The story of a child...and his son.
Han Solo: You know what I do remember? You making me drive you home from the beach because you got too drunk.
Donny: It makes sense to me. When somebody's hammered, they have another guy drive home.
Han Solo: I WAS EIGHT!!!.
Advertisement:

That's My Boy is a 2012 comedy film starring Adam Sandler and Andy Samberg. The film centers on the character of Donny Berger (Sandler), a 12-year-old who becomes a national celebrity in the year 1984 after it's discovered that he's in a sexual relationship with his hot 22-year-old teacher, Mary McGarricle. Mary becomes pregnant from the affair, causing Donny to become a very young single father after she is sentenced to 30 years in prison. Flash forward to present day, where Donny is a washed-up loser who spends most of his time hanging out at the local strip club and is facing prison time for tax evasion (having not paid his taxes since the early 1990s). When he learns that his millionaire son, Han Solo Berger (Samberg) is getting married, he makes a deal with a reality TV show host to reunite Han Solo with his mother so that he'll have enough money to avoid going to jail. But first, Donny must make amends with his son, whom he has not spoken to in years.