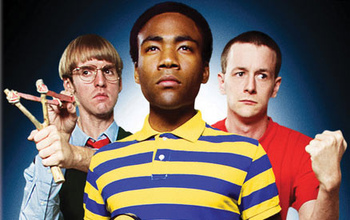 was a sketch group from New York University that did various Internet shorts on YouTube from 2006 to 2010 that gained them a considerable following to the point of being mentioned in Rolling Stone (mainly through their Breakthrough Hit "Bro Rape"). The shorts were characterized by the common utilization of Black Comedy, tackling topics such as pedophilia, rape, child abuse, and Parkinson's disease. In 2009, they made a full-length film called Mystery Team.

Its members were Donald Glover (now better known for his acting and music as Childish Gambino), DC Pierson (author of The Boy Who Couldn't Sleep and Never Had To), and Dominic Dierkes. The name stemmed from choosing another name that started with D.

Has nothing to do with the German Series Derrick.