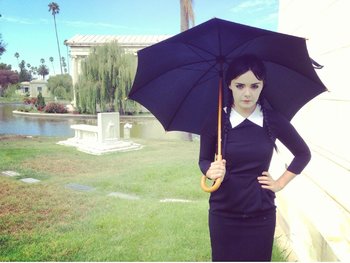 Adult Wednesday Addams is a web series written by and starring Melissa Hunter. It follows a twenty-something Wednesday Addams after she moves to Los Angeles. Every episode revolves around Wednesday experiencing some facet of 21st-century LA life and responding to it in her signature style. The series lasted for two seasons and grew to be quite popular. It even attracted the attention of The Huffington Post and The AV Club thanks to the episode in which Wednesday punishes some catcallers.

Unfortunately, Melissa was forced to remove the series from YouTube after receiving a cease-and-desist letter from the Charles Addams estate. Apparently, no one was allowed to portray a member of the Addams Family as long as the animated film adaptation was in production. This means that there cannot be any more Adult Wednesday for the foreseeable future, despite Melissa's stated desire to make more episodes. Nevertheless, the series is fondly remembered by Addams Family fans who grew up watching the Barry Sonnenfeld films from the early 1990s.

Tropes appearing in the series: