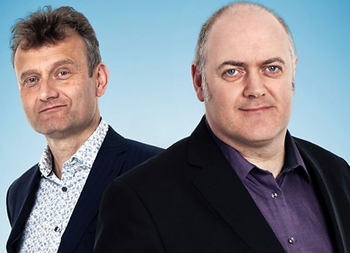 Dara Ó Briain: Hugh and Frankie, just a suggestion, a slight editorial tweak, coming through my ear from the gallery. If we can have some stuff that we can actually broadcast, that'd be great.
Frankie Boyle: Nobody mentioned that.

British Panel Game that is BBC2's equivalent of Have I Got News for You, with strong influence from Whose Line Is It Anyway? (which isn't surprising, considering they were created by the same people). It involves only comedians and is hosted by Dara Ó Briain, an Irish comedian. The series started in 2005 and is still ongoing.

The show's only current regular panelist is Hugh Dennis, who has been with the show from the start; former regulars are Andy Parsons (series 3-14), Chris Addison (series 10-12), Russell Howard (series 4-9, left to star in his own show Russell Howard's Good News), Frankie Boyle (series 1-7) and Rory Bremner (series 1 and 2). There are many semi-regular guests (Parsons, Howard, and Addison were among them before being promoted to regulars), currently including Maisie Adam, Angela Barnes, Ed Byrne, Rhys James, Milton Jones and Glenn Moore.

Advertisement:
Rounds
The current rounds are:

The former rounds are/werenote Mostly dropped because they involved impressions and Rory Bremner left after series two, leading to a change in the show's setup: