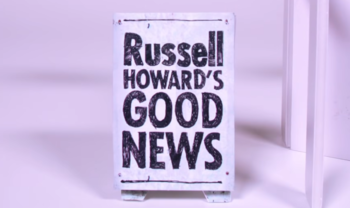 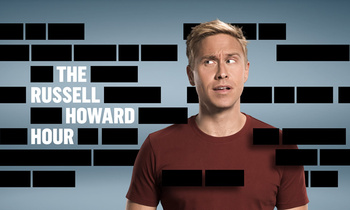 ...and the title card for The Russell Howard Hour
Advertisement:

The shows are presented as Russell talks on stage, commenting on various pieces of news from that week and across the world. He's particularly fond of using reaction clips for jokes as well. Each episode is separated into sections, usually type of news; they don't appear in every single episode (see the folder below).

It started in 2009 after Russell left Mock the Week, and became a common fixture for many years, and ended in 2016 after its tenth series - the show usually had two series per year and with 8-12 episodes a series.

The show has since moved over to Sky 1, retitled to The Russell Howard Hour, and it follows pretty much the same format, and even reusing the same props, but gets more comedians involved with the show. Since the shows are essentially identical in all but name, tropes for both shows can be placed here.

Advertisement:
Common Sections in the shows

Highlights of both shows, as well as an archive of older episodes of Good News can be found on Russell Howards official Youtube Channel