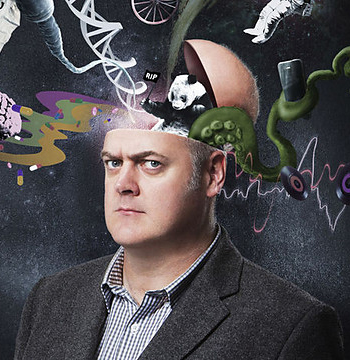 Dara Ó Briain (Pronounced Oh Bree-Ann, born 4 February 1972) is an Irish stand up comedian famous throughout the UK and his homeland. Beginning as a children's television presenter, Dara is now known for presenting Mock the Week, The Apprentice UK - You're Fired!, as well as a few Edutainment Shows School of Hard Sums and Stargazing Live, as well as his own show Dara Ó Briain's Science Club, and in 2016 he became the new host of the Un-Cancelled Robot Wars and Go 8 Bit. He's also an occasional guest on QI. Most recently he's the host of the newest revival of Blockbusters on Comedy Central.

If the excess of educational shows and his nerdy routine wasn't clear enough, Dara is unsurprisingly both a massive nerd and gamer; even stacking atop this, he speaks fluent Irish

and has studied mathematics and theoretical physics (despite looking like a Russian gangster). He was actually on track to become an astronomer before discovering how much he loved performing, and has written children's books about the subject.