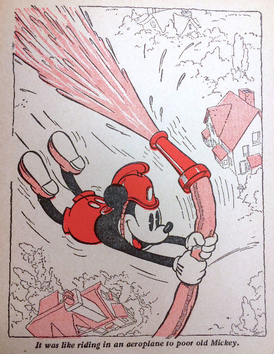 A character is out in their yard, about to wash their car, or water their lawn. They grab the hose, turn it on, and are suddenly flung around like a ragdoll. That's what you call a Hose Rodeo.

This is incredibly common in cartoons. It's been featured in nearly every animated children's show to ever air on TV, from Looney Tunes, to Scooby-Doo. There are many variations on this, ranging from the hose simply being inexplicably powerful, to it being the fault of another character, who rigged it to happen. Occasionally this can cross over with Garden-Hose Squirt Surprise, depending on the amount of characters in the scene.