Western Animation / VeggieTales in the House 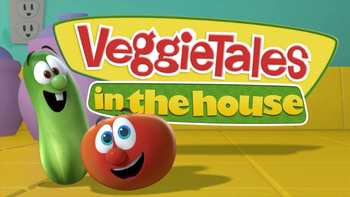 VeggieTales in the House is an animated series that aired on Netflix on November 26, 2014. It is essentially a spinoff series of VeggieTales, all while co-produced by DreamWorks Animation.

The series follows the further adventures of all the familiar Veggie characters that we all know and love as they venture off the kitchen countertop for the first time and explore other areas of the house, such as the living room, all while still learning all about God's love and the biblical and moral values that He teaches us. With familiar characters like level-headed Bob the Tomato, fun-loving Larry the Cucumber, playful Junior Asparagus and his best friend Laura Carrot, sweet and caring Petunia Rhubarb, stiff-upper-lipped Archibald Asparagus, always-hungry brothers Jimmy and Jerry Gourd, et al., it is sure to be an adventure you'll never forget. Doug TenNapel, creator of Catscratch, is the producer. Although the new character designs are not familiar to the last ones, it's still a Christian show, no matter what.

Creators Phil Vischer and Mike Nawrocki still voice their regular roles, though other characters are now voiced by well-known voice actors Rob Paulsen and Tress MacNeille. Also part of the cast are Maurice LaMarche and Kel Mitchell (yes, the one who played Kel on Kenan & Kel.

When the series was first announced back in March 2014, it has been hinted that the characters would be receiving redesigns, which a lot of longtime fans were not happy about. Once the redesigns were finally revealed, there has been a lot of backlash from a lot of fans because of how the new designs looked. However, while a lot of people were in an uproar about it, some have been able to embrace the changes.

In Feburary 2017, the show was retooled into VeggieTales in the City, moving the action to the downtown area (that Bob says was built really fast). The changes end there, as the formula didn't change.