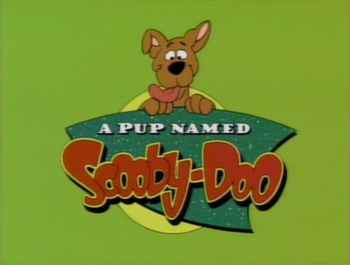 A Pup Named Scooby-Doo is one of the more ambitious additions to the Scooby-Doo franchise, airing from September 1988 to August 1991 for 30 episodes. In it, Mystery Inc. (here called "The Scooby Doo Detective Agency") are aged-down to pre-teens and placed in a new continuity, but still solved supernatural themed mysteries in which the Monster of the Week turned out to be some crook in a mask.

Notable for its Denser and Wackier humor which bordered on outright self-parody, poking fun at all of the tropes and clichés from the previous inceptions of the characters, the most notable being the constant use of a Red Herring foil, seen here Once per Episode in the form of a rotten kid named... Red Herring. This was accompanied by appropriately broader designs and over-the-top cartoon animation which made the original show's already Limited Animation look like still photos by comparison.

The creative team at Hanna-Barbera responsible for the series would leave for Warner Bros. after the first season to work with Steven Spielberg on another, more successful series with similar concepts.

More recently, the concept of revisiting the cast in their earlier years appeared in the movie Scooby-Doo! The Mystery Begins (an Alternate Continuity to the live-action duology serving as a possible explanation for how the gang first met and solved their first mystery) and the video game Scooby-Doo: First Frights. The movie set them as meeting in high schoolnote Which is implied to have likely happened in the original continuity anyway. while the video game had them meet in elementary school. The character designs from this series would be used in the 2013 puppet film Scooby-Doo! Adventures: The Mystery Map.

The show uses several of the same tropes as the original series as well as many of its own. See the Shout-Out page here.

The Scooby Gang as kids would later be revisted in the 2020 CGI film, SCOOB!