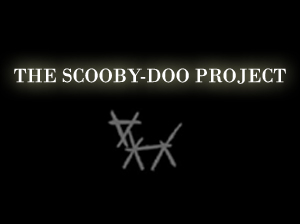 "Maybe, this time, we shouldn't have meddled."
In October 1999, four teenaged sleuths and their Great Dane got lost in the woods while in search of a mystery.
This is their story.
Advertisement:

Scooby-Doo and the gang decide to record one of their mysteries. This time, they're going out into the woods to investigate a haunting there. The ghost is going to be a bad guy in a mask, right?

was a series of bumpers parodying The Blair Witch Project, which was serialized during a Scooby-Doo marathon on Cartoon Network in October and November of 1999. The second run of the marathon culminated in the premiere of Scooby-Doo! and the Witch's Ghost, and the Project aired in a short-film format at the end of both airings of the marathon. However, after that, this short vanished, never to be aired again or released to DVD. It is, however, available on YouTube, through reuploads by fellow Scooby fans.

Several fans have compiled many of the available bumpers into a singular video, such as

In Halloween 2022, for its 30th birthday, Cartoon Network finally uploaded the video officially on their youtube channel.

The Scooby-Doo Project provides examples of the following tropes: