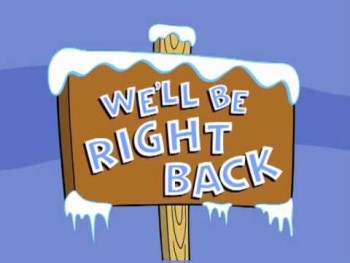 "Patience, my friend, patience... the show will be right back."
Advertisement:

We'll return to TV Tropes after these messages.

Also known as plain "bumpers" or "bumps", these are the short clips (less than five seconds) that appear between television programming content and advertisements. They serve as program identification, and also as delimiters that help bring an audience into and out of Willing Suspension of Disbelief. If they are produced along with the show rather than by the network, they are known as Eyecatches. They can also be useful to a VCR or DVR user fast-forwarding the commercials to signal the user to return to normal speed playback, which is why they're more often found at the beginning of a commercial break than at the end.

During the mid-1970s, at the height of Saturday Morning Cartoons on the Big Three networks (ABC, CBS and NBC), each of the networks created these to signal to the audience when the show was going to commercial. This was due to regulations set by the Federal Communications Commission that required a distinction between programs and commercials, as some in the audience were unable to distinguish between a program and commercial without the aid of a bumper. Usually, these included the phrases "(Show) will be [right] back after these messages" and – particularly for NBC – "We now return to (show)"; the final commercial break usually had a different bumper with the notation "And now, these messages." These continued until each network ended their cartoon blocks, in favor of either primarily educational programming or by turning over the time spots to local stations.

In the United Kingdom, TV ad breaks tend to be in the format Programme → Channel Trailers → Ads → Channel Trailers → Programme. Often two bumpers will be seen, one programme-specific between the show and the trailers, and one more channel specific between trailers and ads. Nowadays, however, it's quite common to see short sponsor ads instead of bumpers.

When television shows are formatted for home video, the ad bumpers may occasionally remain, especially if they are entertaining of themselves. Fan Subs and localizations of anime often save these for the sake of completion.

They can also serve as Filler for shows which run a little short, but not short enough to add another commercial. They can also be removed to accommodate longer shows.

"After these examples... we'll be riiiiight back!":

And now back to TV Tropes!
Feedback