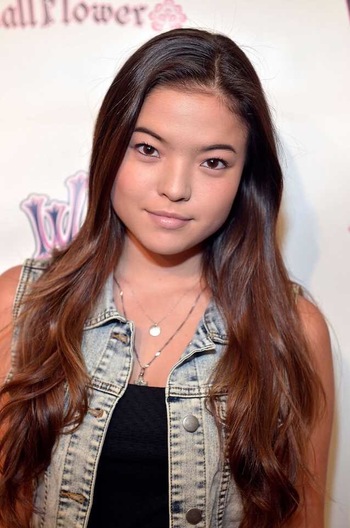 Piper Joy Curda (born August 16, 1997 in Tallahassee, Florida) is an Asian-American teen actress and singer who has appeared in around 15 films and television series. She is best known for her roles as Jasmine Kang in the short-lived Disney Channel original series I Didn't Do It and Casey in the Disney web series Rule the Mix, in addition to her guest role as Kennedy Van Buren/Kumiko Hashimoto in the third season of A.N.T. Farm. She had a minor recurring role as Debby Kang on Randy Cunningham: 9th Grade Ninja . She also costarred as Mack's friend Alyssa in the 2015 sequel to the Disney Channel original movie Teen Beach Movie. Curda attended Wheaton College from 2016-19, where among other things, she originated the role of Kimmi Larkin in the world premiere of then-student production The Thousand Year Rose.

Tropes that apply to Ms. Curda include: