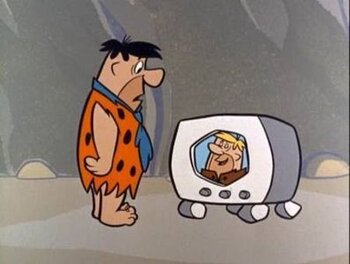 Three knobs? No cable box? And that tiny picture! This television is practically from the stone age!
Advertisement:

Ah, the old boob tube. The cornerstone of the living room. That magical box with a window into entertainment. And it's only natural that the entertainment seen on TV would have some tropes about television and its broadcasts from an in-universe perspective. So just sit on the couch, find that remote, and tune into some literal TV Tropes.

See also These Tropes Are Available On Video And DVD and Fictional Media. Not to be confused with the website you're currently on. For out-of-universe tropes about the medium itself, see Live-Action TV Tropes.

Tropes about the television and associated equipment:

Tropes about the broadcast and TV shows in general:

Tropes about a specific show or specific genre of TV show:

We'll be right back

Keep in mind, this index is for the in-universe portrayals of TV shows. See the floatbox to the right for indexes that cover some of these genres more broadly, and include tropes that are done more in reality than in fiction. Also, for brevity's sake, tropes for in-universe commercials won't be covered here, because that would require copying half of the advertising tropes index.