Series / The Price Is Right 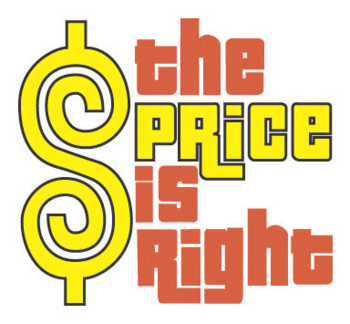 "Here it comes! From the Bob Barker Studio at CBS in Hollywood! Television's most exciting hour of fantastic prizes! The fabulous 60-minute Price Is Right!"
—Opening Narration used from 1977-2009. The "Bob Barker Studio" bit was added in 1998, and the current opening is an abridged version.
Advertisement:

The Price is Right is a Goodson-Todman Game Show originating in 1956 with Bill Cullen as host and directed by Paul Alter, asking four contestants to look at a prize and guess its actual retail price; whichever contestant got the closest without overbidding won the prize. This format ran in daytime and nighttime on NBC, later ABC, from 1956-65 (moving to the latter in September 1963). This original incarnation of the shownote Retroactively referred to as "The Cullen Era") so as to differentiate it from its more well-known reincarnation was pastiched in a famous episode of The Flintstones.

The more familiar format, with the Catchphrase "Come on down!", debuted in 1972...but the story of how it got on the air is a bit odd: Goodson planned to bring back the show as a weekly primetime syndicated series and wanted Cullen as host, but those talks fell through at about the end of January. Mark's next choice was Dennis James, who caught his eye upon seeing him fill in on Let's Make a Deal; Goodson and James recorded a pitchfilm on February 16 for the New show, distributed by Viacom, sharing ideas and concepts that had elements of what was to come.note James would eventually host Price's weekly syndicated nighttime version from 1972 to 1977, his last hosted show.

Around mid-May, while the format was being hammered out (one suggestion was to use three Showcases), CBS daytime programming chief Bud Grant expressed interest in a five-a-week daytime version (along with two other new shows, The Joker's Wild and Gambit) and selected Bob Barker to host it...but Barker wanted no part of it and felt the show could be better produced, begging Grant to let him host one of the other games (it's been speculated that Barker simply wanted to expand his abilities by doing a quiz-based game, as he'd been doing Truth or Consequences for the past 15+ years); Grant's response was that, whereas the other two shows had "traffic cop" roles, Barker had "far more talent" (unwittingly insulting eventual hosts Jack Barry and Wink Martindale in the process).

The daytime series can still be seen on CBS, with the concurrent nighttime show airing until 1980 (Barker replaced James in 1977). Other concurrent syndicated series starred Tom Kennedy (1985-86) and Doug Davidson (1994-95). This format added two new elements — contestants are now chosen from the Studio Audience, and the winner of each item up for bids joins the host onstage to play one of dozens of pricing games. The hour-long format for Price was tried for the week of September 8, 1975 and became permanent on November 3. Johnny Olson was the CBS version's initial caller of the phrase "Come on down" until his 1985 death, at which point Rod Roddy replaced him following rotation of substitutes. Another rotation followed Rod's 2003 death, resulting in Rich Fields becoming the show's third announcer. In addition, the show's rotating cast of models ("Barker's Beauties") provided a larger cast of characters to draw from. As a one-hour daytime show, Price was at its peak for a long period of time, becoming a fixture for stay-at-home moms, children sick from school, and college students, garnering a fandom of all ages while making household names of Bob and Rod.

After starting his 35th year with the show, Barker announced his retirement from TV at the end of October 2006; his final show aired June 15, 2007, and Drew Carey succeeded him on October 15. Carey had already cut his teeth in the game show hosting field for CBS with Power of 10. Fields left the show in 2010, and a third rotation of substitutes ensued until fellow Whose Line Is It Anyway? colleague (and former The Weakest Link host) George Gray replaced him.

The show has been made in many other countries, such as the United Kingdom from 1984-2007 (with hosts including Leslie Crowther [who notably called the contestants to "Come on Down" himself, rather than having The Announcer do it] and the legendary Bruce Forsyth) and Australia (which featured versions hosted by Ian Turpie and Larry Emdur, although there were versions prior to these, including several short-lived adaptations of the original Bill Cullen format).

Tropes applying to the Price is Right, come on down!

"Bob Barker reminding you, help control the pet population. Have your pets spayed or neutered. Goodbye, everybody!"