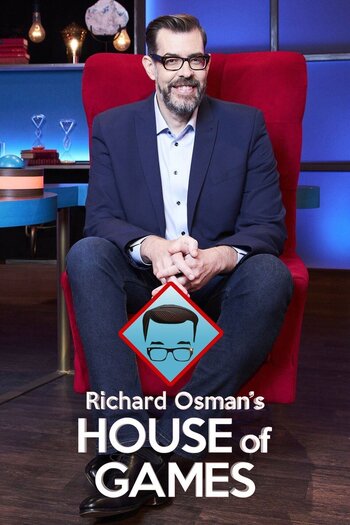 A BBC Two early-evening Game Show that began in 2017, hosted by Richard Osman. It is, as the name suggests, essentially a Minigame Game where four celebrity contestants compete in a series of games (including general knowledge rounds with some kind of twist, word puzzles, maths, geography, history and music); the show airs every weeknight, and each week's episodes feature the same celebrities, with an individual winner for each episode (who wins an Osman-branded prize from that day's selection of daily prizes) and an overall winner at the end of the week. The contestants are generally TV presenters, personalities and comedians, with actors, sportspeople and singers also in the mix.

A BBC One spinoff, retitled Richard Osman's House of Games Night, began in 2020, with various gimmicks added for the move to primetime including a house band, guest experts and rounds involving props.

A comprehensive episode guide, including synopses of all the games and full details on the contestants, prizes and results, can be found here

Compare with Taskmaster, a panel show with a similar premise of comedians and actors vying for points over the course of several episodes (and which Osman himself appeared as a contestant in its second series).