And Your Reward Is Interior Decorating 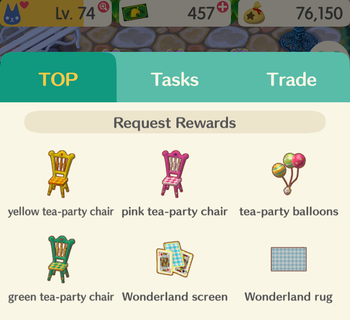 Some video games represent achievement or progress by means of decorations or improvements to a structure (normally your home). As a result, you can certainly expect furniture to be a type of reward item in those games.

Furniture pieces are often obtained by solving NPC requests, winning contests or even outright finding them in the wild. This does not count stuff you can buy or make yourself, unless you're required to unlock the right to purchase/produce said stuff in the first place. Remember that we are talking about rewards here.

Sometimes, it will be possible to sell or exchange those rewards for other pieces of furniture that are more to your liking (particularly common in multiplayer Life Simulation Games). Very much a form of Cosmetic Award, since furniture rarely has practical use in gameplay, serving more to make your place look neater. There are, however, certain instances where owning the right furniture can lead to additional rewards from visitors.

Furniture may come in cute thematic sets as well. Collecting all pieces of a set might lead to a Set Bonus.

Compare Trophy Room. Naturally goes with An Interior Designer Is You. See also And Your Reward Is Clothes, which is the same thing, but with clothes instead.

Alternative Title(s): And Your Reward Is Furniture