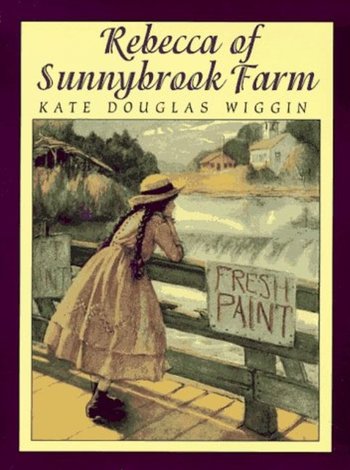 Before the rather Follow the Leader classic Anne of Green Gables, there was Rebecca.

Rebecca Rowena Randall, named for the two heroines of Ivanhoe, is the second-oldest child from a large, poverty-ridden family. Her great-aunts, Miranda and Jane Sawyer, write to Sunnybrook Farm, where Rebecca lives with her six siblings and widowed mother. They request one of the children to come live with them in Riverboro, Maine, to get an education and help ease Mrs. Randall of the burden of providing for seven children.

The aunts are expecting Hannah, the oldest Randall child, who is bland, sensible, and good with household skills. Hannah, though, is needed to help her mother, who sends Rebecca instead. Miranda and Jane are greeted with the imaginative, spirited Rebecca, who takes the household—and then their village—by storm.

Rebecca's unrelenting optimism and infectious joy of life breathes color into the everyday lives surrounding her, causing her to touch and befriend many—from old Jeremiah Cobb and his wife Sarah; to Emma Jane Perkins, who becomes her best friend; and to Adam Ladd ("Mr. Aladdin"), who not only takes an interest in Rebecca's education, but grows increasingly fond of Rebecca as the years go by.

Though Rebecca's life is filled with all the ups and downs of adolescence and all the pain and troubles of growing up; she not only gains understanding and wisdom from her experiences, but learns how to curb her blissful nature into helping her bear life's hardships with a sunny disposition.

A sequel, New Chronicles of Rebecca followed, as well as several other Rebecca books written by Eric Wiggin, a great-nephew of Kate Douglas Wiggin. It was adapted to stage and three movies were made, including one starring Shirley Temple in the title role. In 2020, a short Japanese anime film titled The Chronicles of Rebecca

, was intended to be screened in March as part of the Young Animators Training Project, but the premiere was cancelled due to the COVID-19 Pandemic, so it was relegated to streaming as a result. This marks the first time the story has ever been adapted into animation.

Penned by American author Kate Douglas Wiggin in 1903 to massive success, Rebecca of Sunnybrook Farm continues to touch readers just as it did over a hundred years ago. Mark Twain famously called Rebecca "beautiful, warm and satisfying"—and it is easy to see why.