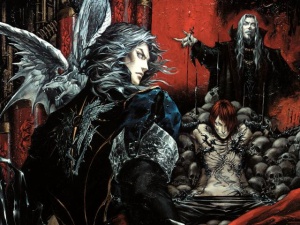 The second Castlevania game for the PlayStation 2 following Castlevania: Lament of Innocence, released in 2005. It was also released for the Xbox.

This installment takes place three years after Dracula's defeat at the hand of Trevor and his comrades. In Dracula's final breath, he cast a curse that ravaged the European countryside, spreading disease, mob violence, and heresy in its wake. During this time, Hector, a former henchman of Dracula's, seeks revenge against his former compatriot Isaac for the death of his fiancée Rosaly.

Gameplay-wise, it retains a similar design aesthetic to its immediate predecessor, with two important wrinkles: there's a lot of Item Crafting, and you can also forge your own Mons to follow you around and fight enemies. These "Innocent Devils" will evolve into new forms depending on what types of weapons you use, so there's a lot of different things to try.

Released shortly after Castlevania: Dawn of Sorrow, the game would be followed up by Castlevania: Portrait of Ruin.

A comic titled Prelude to Revenge was released as a pre-order bonus for the Japanese version of the game, a prequel story which was authored and illustrated by fan-favorite artist Ayami Kojima. A manga authored by Kou Sasakura was released in 2005 and 2006 that also serves as a prequel story, which Kojima considers an extension of Prelude and therefore canon, which was also supervised by IGA. Two volumes were released with more that were planned, but the series was cancelled, and the two existing volumes were adapted into English by Tokyopop. The game also serves as one of the inspiratios for the Netflix Castlevania animated series.

Curse of Darkness provides examples of: