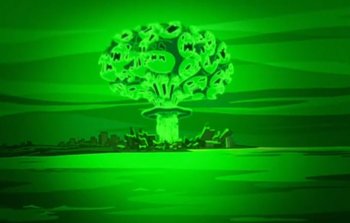 As if a regular nuke wasn't scary enough!
Many works have the Holy Hand Grenade: a purifying, holy blast of light and goodness which eradicates evil in sight, turning it into a dusty pile of ash.
Advertisement:

However, what happens if it gets reversed?

The Unholy Nuke tends to be a power fit for a Big Bad: a devastating magic/technique/ritual fueled by unholy power, often the Evil Counterpart to a technique used by the good guys. Usually it involves Black Magic and darkness, but other elements can play a role as well. Bonus points if it's Powered by a Forsaken Child. It may be a Dangerous Forbidden Technique. Sometimes an Evil Knockoff will use this as a dark mirror of one of the hero's own powers. In Video Games, expect to see it used by the Final Boss.

When handling the powers of darkness, don't forget that Evil Is Not a Toy.

See also Light Is Not Good, Casting a Shadow, Person of Mass Destruction. May or not be part of a Yin-Yang Bomb. Contrast Holy Hand Grenade. See also Fantastic Nuke, where the emphasis is on the scale of the damage done regardless of whether the spell is specifically "unholy" or not.

When one of the Desire Disks is shattered, it creates an explosion that devastates the surrounding area and attracts demons.

When one of the Desire Disks is shattered, it creates an explosion that devastates the surrounding area and attracts demons.