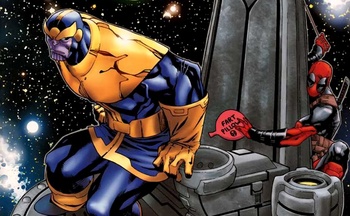 Deadpool makes an ass out of Thanos.
Advertisement:

Whoopee cushions are items that make a farting sound when someone sits or steps on them. Frequently used by The Prankster, and may be part of an April Fools' Day joke. They are a form of Toilet Humour, so people who use them are usually children or very immature adults. Compare Stink Bomb, which recreates the smell of a fart rather than the sound. Sub-trope of Grossout Fakeout.