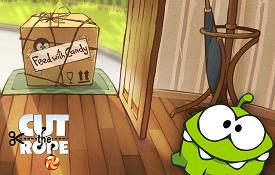 Feed With Candy
Cut the Rope is a physics-based puzzle video game for the iOS, Android and DSiWare.
Advertisement:

The objective of each of the game's levels is to maneuver a piece of candy into the mouth of a cartoon monster, called Om Nom, and also to pick up up to three stars per level by touching them with the candy.

All you have to do is cut the rope to let the candy drop into Om Nom's mouth... at first. Later levels provide bubbles, automatically-appearing rope, sliding rope as well as hazards in the form of spikes, spiders and electrical traps. Its direct sequel, Cut the Rope: Experiments, builds on prior mechanics in the same vein, adding stuff like ropes attached to suction cups. A third game, Cut the Rope: Time Travel, adds the challenge of feeding two Om Noms. A fourth game, Cut the Rope 2, introduces some new friends to help Om Nom get his candy. The fifth game, Cut the Rope: Magic, adds boss levels and the ability to transform Om Nom into other creatures.

Despite sounding similar, this game is completely unrelated to You Have to Burn the Rope, other than the fact that both games involve rope and breaking it.