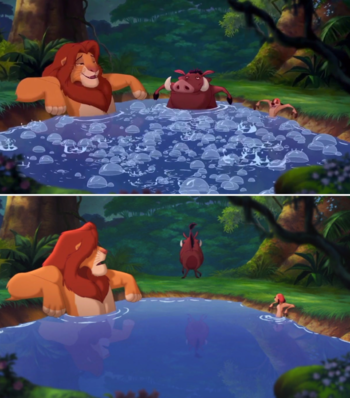 Every pool can be a jacuzzi if you fart long enough.
(thinking) It's not fair! I'm not the only one who stinks. When Mum lets off a poot, she coughs at the same time to cover it up. When Dad lets off, he's so sneaky you don't know what's coming until it hits you. Gran's always letting rip. She just blames the cat. Suzy claims she never trumps, but she sounds like a brass band when she thinks no one's listening! And when the dog boffs, he wafts it about! So there, everybody does it! But *I* do it best... Especially in the bath!
— Bertie Burns, Dirty Bertie, "Pooh! Is That You, Bertie?"
Advertisement:

A lot of comedies seem to follow this rule: if farting is funny, then it's even funnier when it's underwater, the reason being that farting underwater produces a bubble.

The thing is, this bubble means that it's pretty hard to pretend you didn't fart, while on the flip side, if there is air in your swimsuit and it gets released, it's easy to be mistaken for having farted. Also, it's clear who did it unless more than one person is in close proximity to the one who farted. Plus, bubbles are sort of inherently funny anyway.

Common among people who fart a lot anyway and anyone boorish and/or slobby, but any character can be part of this gag. It may or may not be followed by Instant Fish Kill.

Sub-trope of Toilet Humour. Compare Putting the Pee in Pool for another water-related potty joke.