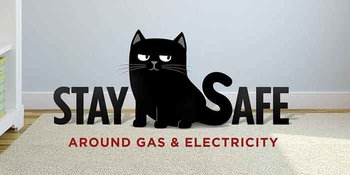 "Unlike me, you've only got one life."
— Claude
Advertisement:

or Claude the Safety Cat, is a series of PSAs by New Zealand website Worksafe.

Despite the site proper being about safety at work, the Claude the Cat PSAs teach about a variety of safety topics, such as gas heaters, electric blankets, and DIY.

The PSAs feature a talking, safety-conscious cat named Claude who urges the viewers to look after "their only life".

Claude the Cat provides examples of

Claude says that if you cook with gas in a poorly-ventilated caravan, you'll choke like a canary.

Example of:
Canary in a Coal Mine

Claude says that if you cook with gas in a poorly-ventilated caravan, you'll choke like a canary.