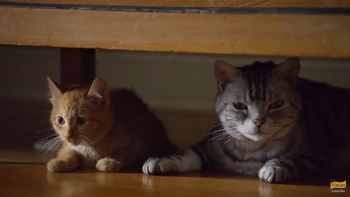 is a series of ads produced by the Friskies cat food company and BuzzFeed Video. It is narrated by a pet cat (played by Ze Frank of True Facts fame), who has taken it upon himself to mentor a kitten who's new to the house. In typically serene style, he guides his protégé through such human mainstays as the toilet, football, and vacuums (or, the dreaded monster "Vack Ooum").