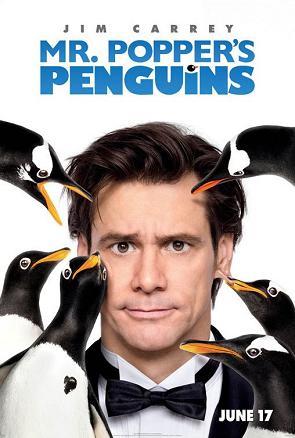 A 2011 film starring Jim Carrey and directed by Mark Waters based on Richard and Florence Altwater's children's book of the same name.

Mr. Thomas "Tom" Popper, Jr. (Carrey), a workaholic realtor, who spends so little time with his family that he and his wife Amanda (Carla Gugino) recently divorced and he doesn't pay much attention to his kids Billy and Janie. One day, Popper gets a surprise from his recently deceased father: a gentoo penguin. Upon trying to return it, a miscommunication is made and is sent five more penguins instead. He tries everything in his power to be rid of the penguins, but when his children fall in love with them, his tune changes. Throughout the course of the movie, Mr. Popper becomes close to the penguins and learns that the most important thing in life is family. Meanwhile greedy zookeeper and penguin expert Nat Jones (Clark Gregg) is willing to do whatever it takes to get the penguins into his zoo for wealth even if it means having to break into Mr. Popper's home to steal them, or ruin Mr. Popper's life.