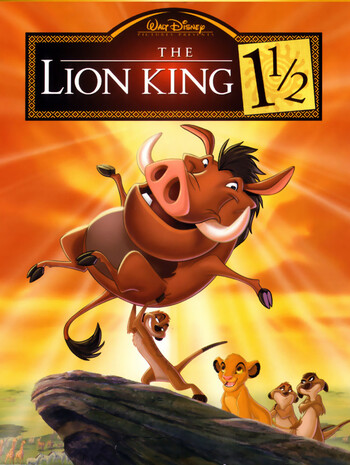 The film is a part-prequel, part-Perspective Flip of the original Lion King from Timon and Pumbaa's perspective. Both characters were already the first to get their own spin-off in Timon & Pumbaa, which, while not outright stated, this film seems to draw heavy inspiration from. The film follows the Origin Story of Timon and Pumbaa (mainly Timon) prior to the first film, and the hijinks they got up to offscreen during the rest of it.

Following the Shakespearean tradition of the movies, 1 ½ bears more than a few similarities to the extra-Shakespearean Rosencrantz and Guildenstern Are Dead.