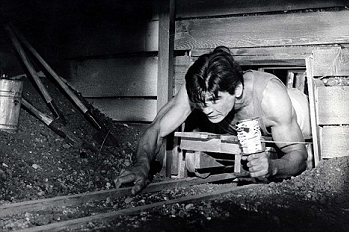 A Tunnel King is a character who is an expert in, well, tunneling. His solution to any problem is likely to be "We'll dig our way out." Carrying the trope to its extreme, the Tunnel King may dwell Beneath the Earth in an underground civilization that he constructed himself.

In animated series, this character will often be a burrowing animal with their digging abilities carried to ludicrous extremes. Once in a while, it will save the trapped main character(s) because "it knows a way out".

Human versions of this character are almost always nicknamed The Mole, but that title was already taken for a different trope. Mole Miners and Mole Men are often this. In a fight, expect some kind of Dig Attack. See also Our Dwarves Are All the Same for an entire race typically having this trait.