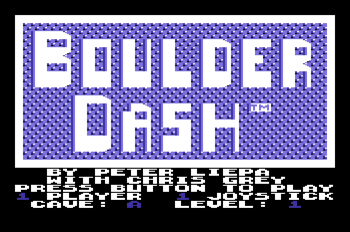 Do-do-do-do-do-do-do-do-do-do-do-do-doooh-dooooooooh...
Boulder Dash is one of the more popular action-puzzle games of the 8-bit era, and remains the archetypal Digging Game. First released for Atari 8-Bit Computers in 1984 and endlessly ported, including to the NES and Virtual Console. In it, the hero Rockford must explore a series of caves/levels, collect a certain quota of diamonds, and reach the exit without dying. Depending on how a level is designed, it could be evocative of Block Puzzles like Sokoban or a hectic arcade game similar to Dig Dug, minus the player's capacity to directly defend himself.
Advertisement:

Boulder Dash's primary feature is that boulders and diamonds are subject to gravity, but the player is not. A stack of rocks and diamonds will roll off of each other into a pile if there is room to do so. A careless player may find himself crushed or trapped beneath a mountain of rubble. Certain enemies, when killed, explode into diamonds which can either be collected or kill enemies or players beneath them. Other enemies simply explode, like highly mobile Exploding Barrels, which can be necessary for blasting a hole in a wall.

Boulder Dash was also a technical achievement, with large, freely-scrolling multi-screen levels potentially filled with falling rubble and roaming enemies. It achieved this effect on relatively underpowered hardware by way of its Invisible Grid; everything moved one "tile" at a time, and enemies were lethal if the player was simply adjacent to them.